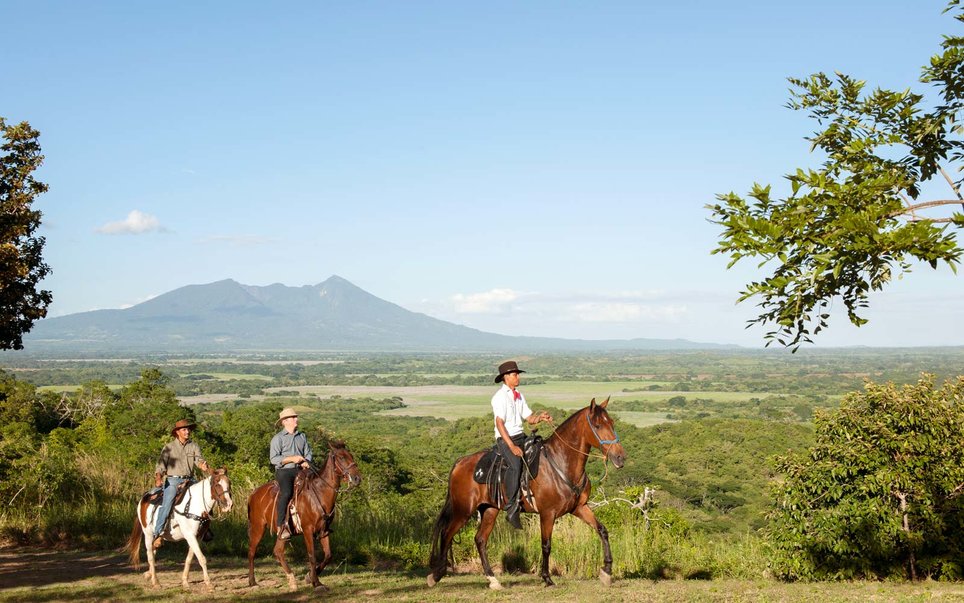 A wave of incredible new properties is bringing renewed attention to Central America’s largest country, which visitors flock to for rain-forest tours and snorkeling around surrounding islands. Fifteen miles south of Granada is the recently opened Nekupe Sporting Resort & Retreat. Nekupe, a native word used to describe heaven, is an intimate eight-villa resort spread across 1,300 acres on the mountainside. Floor-to-ceiling windows offer uninterrupted views of Mombacho, but the best way to experience the cloud-forest-covered volcano is hiking, mountain biking, and horseback riding. Travelers seeking a beach escape should head to the new Meson Nadi hotel on the edge of Costa Esmeralda: a contemporary, Bauhaus-inspired, six-suite boutique with concrete tiles, handwoven hammam blankets, and gardens.

While it is the largest of the Central American nations, it is also the most sparsely populated. Although Costa Rica, its neighbor to the south, has long been a bustling tourist destination, Nicaragua has only recently come into its own. Travel to Nicaragua if you’re looking for a rainforest adventure on the road less traveled—and less pricey. Nicaragua has the largest area of primary-growth rainforest north of the Amazon, six active volcanoes and 550 miles of coastline dotted with sandy beaches and sleepy surf towns. There are few ancient ruins left in Nicaragua, but picturesque colonial towns–like Granada and Leon–make up for it with their pastel-painted churches and vibrant local festivals.

The Pacific side of the country is more popular with visitors, since the roads are more navigable and tourist hot spots like Lake Nicaragua, Grenada and San Juan del Sur are clustered along the coastline. The Mosquito Coast is the nickname for the Caribbean side of the isthmus, so-called for the indigenous tribe native to the area and not the pesky bug—although there are plenty of those. Mosquito is remote and difficult to reach by car; however airplanes can be easily chartered to airstrip in Bluefields from the Managua airport. The beach town of Bluefields is the gateway to the charming Corn Islands and Pearl Keys, full of luscious creole cuisine, crystal blue lagoons and stunning white sand beaches. Check out the Travel + Leisure Nicaragua travel guide to find the best hotels, restaurants and destinations to explore in this beautiful country.

Things Not to Miss in Nicaragua

• Visit the Miraflor Nature Reserve to immerse yourself in native flora and fauna
• Take a volcanic trek and go volcano-boarding on the black sand slopes of Cerro Negro
• Go snorkeling off the Corn Islands and Pearl Keys.
• Ride a horse on the beach.
• Take a ferry ride from Granada on Lake Nicaragua to Ometepe Island and Las Isletas two of the 360 islets in Lake      Nicaragua.
• Catch a wave off the coast of San Juan del Sur
• Admire the colonial architecture in Grenada

When to Go to Nicaragua

There are two seasons in Nicaragua, a wet winter season and a dry summer season. More people choose to visit Nicaragua in the summer (December to April) to avoid the daily rainfall of the winter (May to November). Even in the winter though, the Pacific Coast has dry mornings and rainy afternoons. The Caribbean coast is struck by tropical storms in September and October and generally hot and humid the rest of the year. Be sure to check with your doctor before going to Nicaragua for an up-to-date list of vaccines and malaria medicine, and be sure to bring plenty of bug spray.

Generally speaking, Nicaragua travel has been quite safe for tourists, however crime has been on the rise over the last few years. Tourists are often targeted for theft in cities, on the beaches and at roadblocks. As with any foreign travel, be sure to check the U.S. State Department’s website for updated information on how to travel safely in Nicaragua.

Have Carry-on Will Travel…

Make It a Great Day!

A beautiful shot of Vancouver captured by @carolynbheller, thanks for tagging #smartertravel!

Eco Reco: Personal EV for All